Last year, the club “Verein für Fallschirmsport Marl e. V.” was proud to set up one of the largest wingsuit-performance competitions with a number of 31 athletes from seven different nations. Wings over Marl 2015, however, exceeded all expectations: In total, 44 wingsuit pilots from twelve different countries came to Marl to compare their skills and wingsuits and to learn from each. 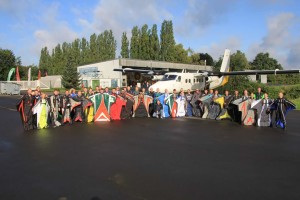 In 2005, Wings over Marl was one of the first wingsuit performance competitions worldwide and has contributed significantly to the development of competitions of this kind. Over the last ten years the rules have been developed and improved more and more. Today, the participants’ performance is measured in the disciplines time (maximum freefall time), distance (maximum horizontal distance) and speed (maximum horizontal freefall speed) in two passes. The overall results of these disciplines count. The competitors’ performance is measured in a measurement window from 3,000 to 2,000 meters above ground via GPS Tracker (FlySight – www.flysight.ca) and the appropriate software (Paralog – www.paralog.net). Each participant must therefore complete six rating jumps, which could be completely accomplished this year. To maintain fairness, the athletes are divided into different classes according to their wing surface: Rookie- small wingsuits, Intermediate- medium wingsuits, Open Class- large wingsuits.

As in 2014, Wings over Marl 2015 was one of six venues of the Paralog Performance Competition World Series, which ranks participants of all six events. Also, Wings over Marl 2015 was the German qualifying event for the Wingsuit World Championships which are expected to take place in Chicago next year. Therefore, the German Aero Club e. V. (DAeC) awarded the top three German participants. The club “Verein für Fallschirmsport Marl e. V.”. is very proud of the winners Florian Kaschuba (1st place), Benedict Hövelmann (2nd place) and Helmut Tacke (3rd place), who all are club members and characterize and develop wingsuit flying in Marl together with all the other club members. 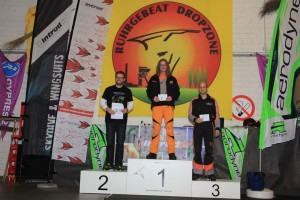 In all three international classes, international winners climbed the podium:
Belgian wingsuiter Martijn Decauter won first place in Rookie class, followed by Marcel Peters from Marl, who competed in a tracksuit (a kind of preliminary suit to wingsuits) last year, and Rodney Stone from Great Britain. 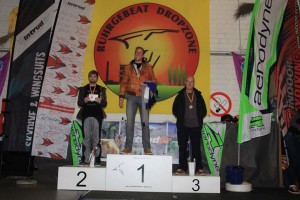 Zoltan Dolhai, owner of the Hungarian company Intrudair, who was one of the main sponsors of the competition again this year, reached 1st place in Intermediate Class. He shared the podium together with the Irish Marc Daly (2nd place) and Desmond Reardon (3rd place). 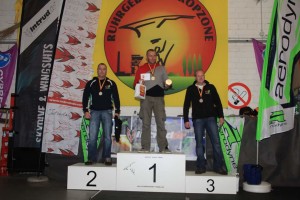 In Open Class Florian Kaschuba from Marl reached 3rd place and was thus able to prove his excellent overall performance, which he showed in various competitions throughout the year, once again. Slovenia’s Robert Krenker –clearly astonished- reached 2nd place. Spike Harper from Great Britain defended the trophy and 1st place in Open Class for his wife Jacky, who won last year’s competition, with superior results. 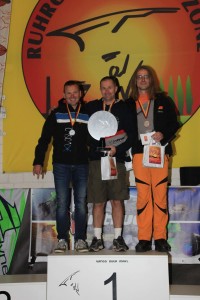 Despite the designation as a „competition“, the focus at Wings over Marl lies on the mutual exchange of experience, the opportunity to learn about different wingsuits and from different athletes and on meeting old and new friend. Thus, each participant was able to go home as a winner again this year, not only because of the generous prices of our many sponsors.

The club “Verein für Fallschirmsport Marl e. V.” hopes to welcome as many international participants at an at least as exciting and familiar competition- Wings over Marl 2016.